wanderrwithmee
A little girl wandering and exploring the world to find the beauty in all things. Eat. Learn. Travel. Inspire. Love. A backpacker someday ✈

The link above will re-direct you to a post I made before about how I scored my benchsetter fun meet passes to meet my ultimate bias, Lee Min Ho.

I can’t believe I did write like that before.

This is a throwback because there will be another Benchsetter Fun Meet to be held on March 21st at Araneta Coliseum.

Of course, Lee Min Ho will be there for all of us.

Here are the mechanics.

Promo runs from March 6 till March 21.

ENJOY AND SEE YOU THERE 😉 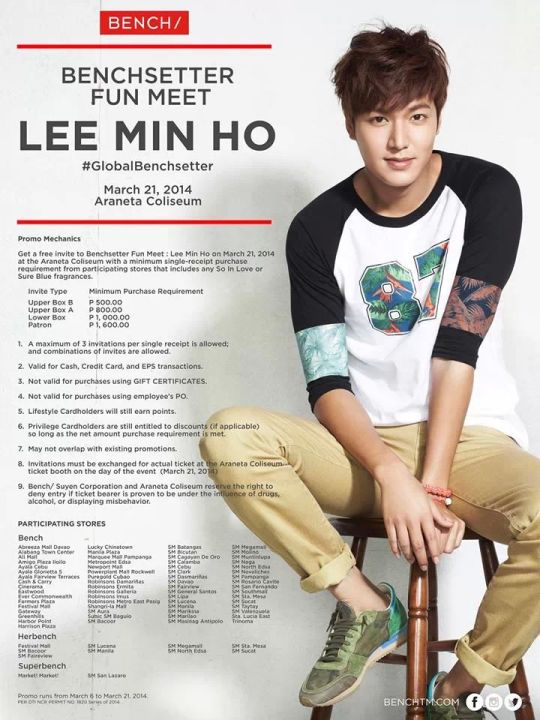 After I got home from a very stressful day in school due to my long exam, I jumped on my bed – literally – and opened my tablet.

As I was browsing through my facebook news feed, I came across this article which changed my mood.

Popular actor Lee Min Ho will be releasing his first album and kick off a 10-city tour around Asia.

On March 14, Lee Min Ho’s agency, Starhaus Entertainment, announced, “Lee Min Ho’s special album will be released worldwide. He will kick off his live tour late May in Korea.”

“This album release is not in interest of becoming a singer but for fan service. This is like a respond to national and international fans who have supported him until now…

Lee Min Ho – Manila, 2013.
Revisiting his My Everything concert.
#throwbacknotthursday

It has been almost three weeks since my last update.

The past month was really toxic and I’ve been preparing for so many things at the same time which includes the successful My Everything Global Tour of Lee Min Ho here in Manila.

I think to complete every fan girl’s experience, it is a MUST to attend your ultimate bias’ concert if he’s a singer or a fan meet if he or she is not.

But of course, attending both will be better.

Luckily for me, I got to attend both and scored a meet & greet also!

His fan meet was held here in Manila last year dated November 16 of 2012 and two days after, a hand shake meet & greet was held.

His My Everything Global Tour stop in Manila was just last Saturday, July 6, 2013.

Words cannot express how much every Minoz – what the…

Warning: This is, by all means, a fan girl post.

First, I wanna greet all of you a happy valentines day!

I hope you enjoyed yours as much as I did.

Contrary to what you might be thinking right now..

I didn’t even go out of the house today!

Barely got out of bed too.

What made me enjoy it?

I was de-stressed today.

Thought about nothing else but making myself feel comfortable.

I missed my bed because I haven’t been home much lately and I made it a point that I spent more time on the bed than out of it today.

Before valentines day ended also, I read something online which made me squeal in excitement!

I couldn’t believe the texts that I have received first but then it was confirmed through the online website of Bench/ – a clothing line here in the Philippines.

Korean heartthrob LEE MIN HO is coming back to Manila this March!!!

For what event, that I’m still not sure.

I shall give you an update if they release the details already.

I think this meeting will be somewhat like the fan meet also.

I surely hope that there will be a meet and greet opportunity again!!

For now though, I will save money just to be sure that I’ll not be missing that opportunity.

My valentines day couldn’t get any better than this!

It has been almost three weeks since my last update.

The past month was really toxic and I’ve been preparing for so many things at the same time which includes the successful My Everything Global Tour of Lee Min Ho here in Manila.

I think to complete every fan girl’s experience, it is a MUST to attend your ultimate bias’ concert if he’s a singer or a fan meet if he or she is not.

But of course, attending both will be better.

Luckily for me, I got to attend both and scored a meet & greet also!

His fan meet was held here in Manila last year dated November 16 of 2012 and two days after, a hand shake meet & greet was held.

His My Everything Global Tour stop in Manila was just last Saturday, July 6, 2013.

Words cannot express how much every Minoz – what the fans of Lee Min Ho are called – enjoyed the concert.

Every penny was worth it!

He was worth all the effort every single person there exerted just to see him.

Until now, I’ve read from their forum that they still couldn’t get over the concert (and him).

He is the most down to earth international star they know and the love he has for his fans can be felt by them personally.

He has this certain charm that one cannot resist.

Personally, I saved up for a VIP seat just to see him for the third time.

No regrets. AT ALL.

Because the atmosphere was so lively, I didn’t have time to focus the camera so for the quality of the photos, forgive me just this once. 😛 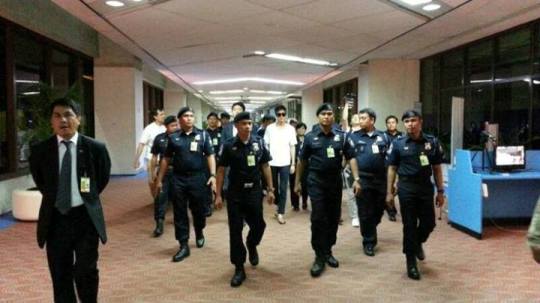 The following day, he attended the ribbon cutting of Bench tower at 3PM then proceeded with the press conference and numerous other more interviews.

his tongue out habit! 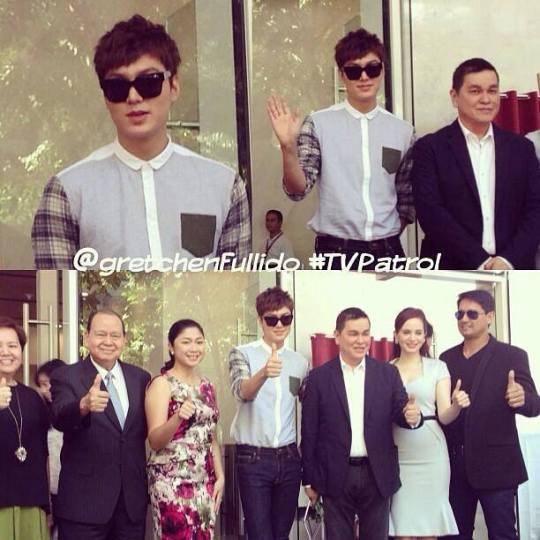 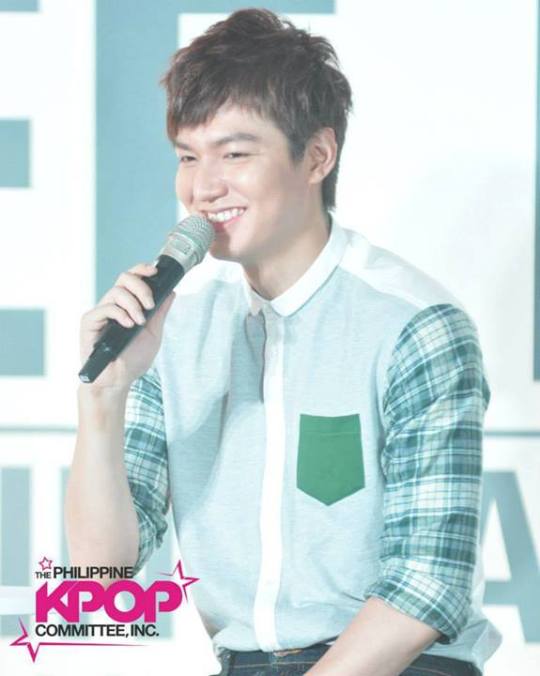 He ate at Aracama this night at Fort Bonifacio, Taguig –near Bench Tower.

The next day was his concert!

people lining up to get into the MOA Arena

in my seat while waiting for the concert to start

oppa singing My Everything 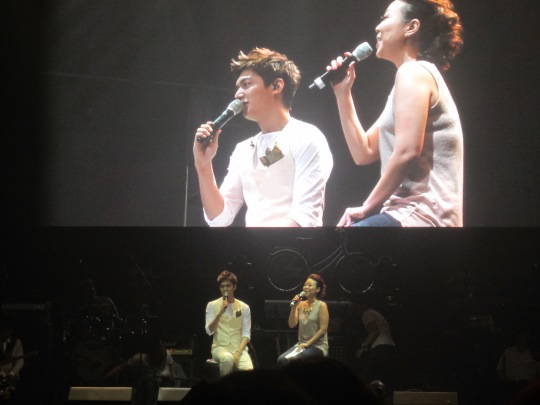 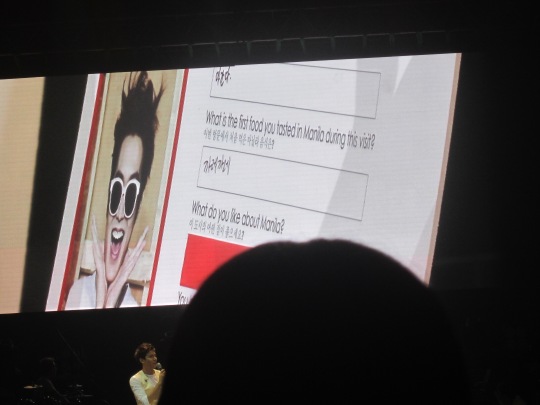 kare-kare was his answer. cutie picture!! 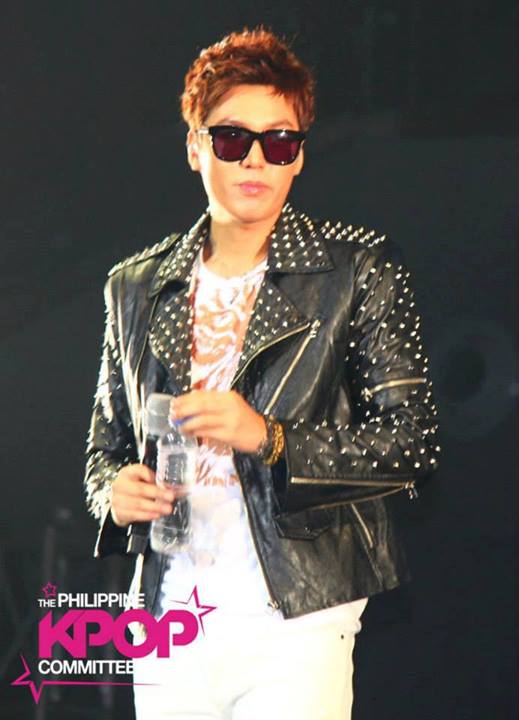 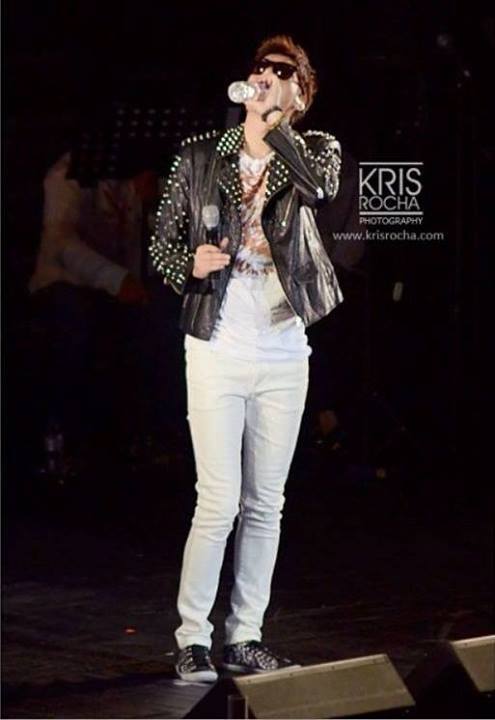 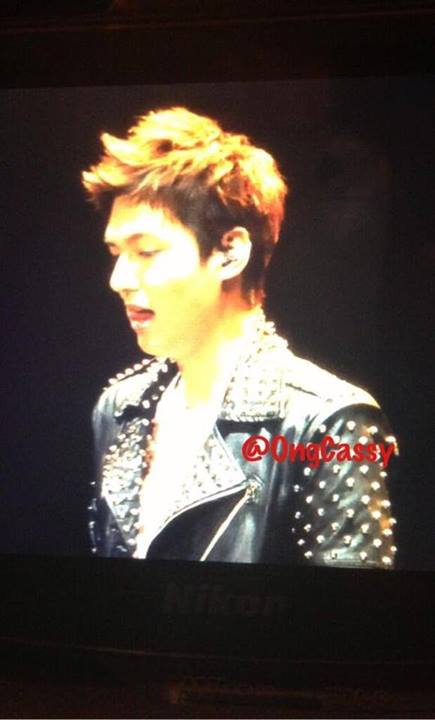 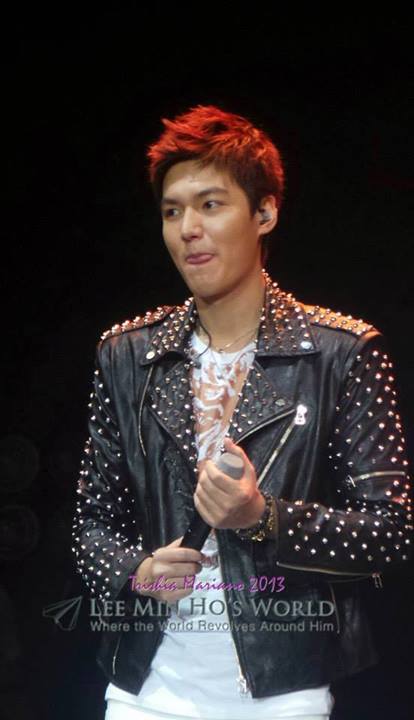 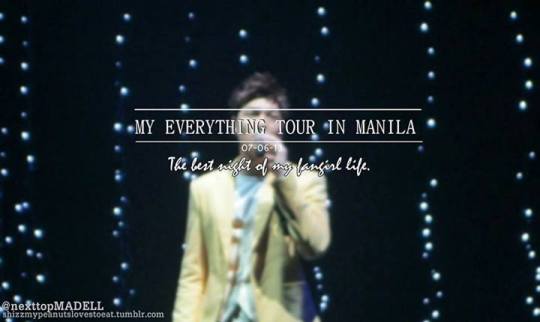 what my fellow Minoz feel. hahaha. my best moment is yet to come! 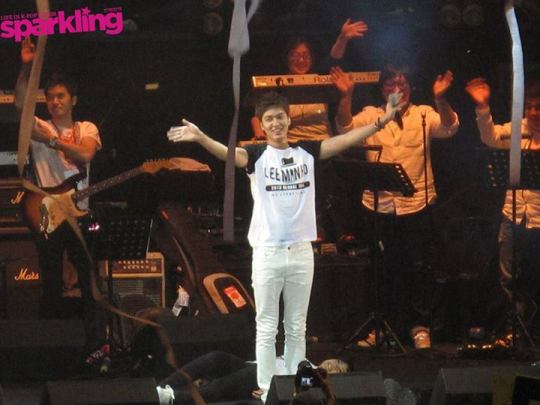 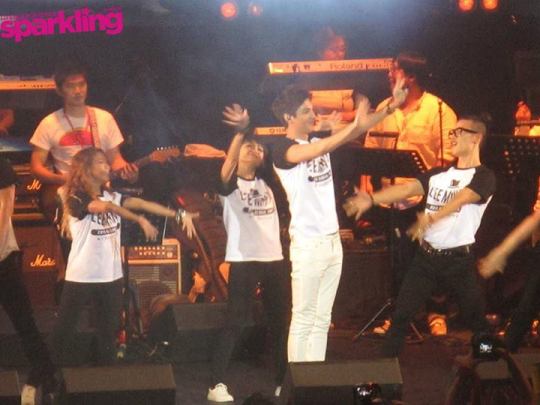 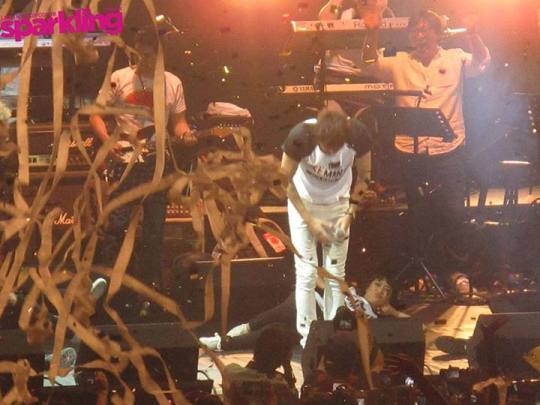 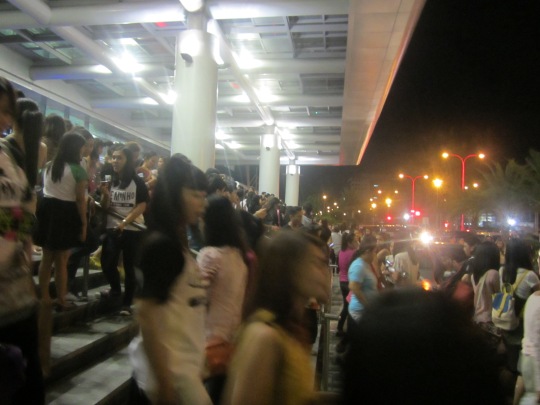 where he ate after the concert 🙂 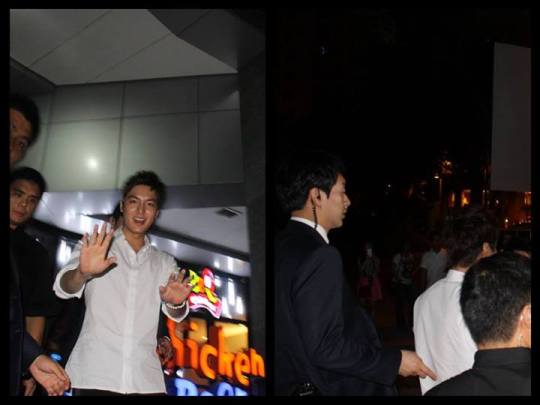 His stay here was really really memorable for all the Minoz.

We know him even better now and we feel his love even more.

Every one is wishing for a part 3 visit here in Manila.

I hope next time when he comes here, even for just vacation, I get to see him and hopefully be in the same island as him.

Palawan? Boracay? Anywhere with him is fine!!

THE SOFTEST PAIR OF HANDS ANY GUY CAN EVER HAVE.

Before heading back to South Korea, he had dinner with his Bench family.

Here are some of the photos they took.

dinner at Dusit Thani Hotel, Makati with his Bench family

Now he’s back in South Korea.

Look at the way he carries himself.

All the photographs of him are magazine cover ready!! 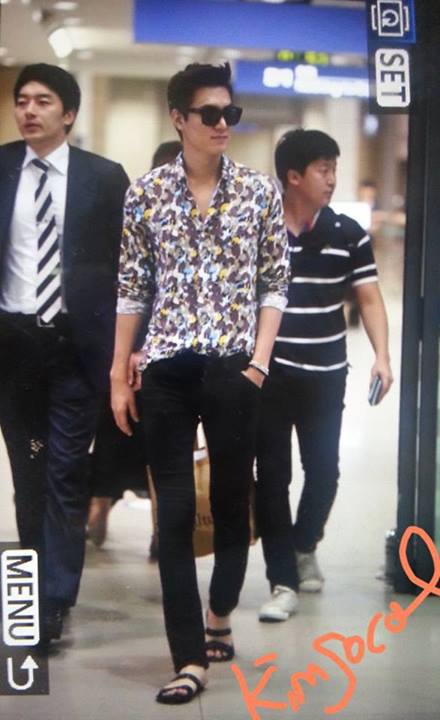 HOW CAN SOMEONE BE THIS ADORABLE WHILE TASTING MANGO JUICE!!

Wow! Just look at how many people lined up early just to see him!

Concert starts at 8PM and even though the sun was shining so bright, they didn’t care.

THE WHOLE PHILIPPINES LOVES HIM.

That is it for now.

35 days till we meet again.

I first saw 이민호 in flesh when he went here for a Fun Meet for a Global brand, bench/.
Even though I was not that close to him, it was very fulfilling.
When I first heard his voice live, I screamed right there and then.
His voice was really manly!!
Sadly, very few participants of the game had the opportunity to be close to him.
Luckily, two days after, I was gonna meet him again.
And this time, UP CLOSE!
I’ve done great lengths for that ticket.
Read it here. ^^
After the handshake event, I felt like crying.
SERIOUSLY.
The experience was really overwhelming.
I was so happy I couldn’t explain myself.
Also, was literally all smiles while talking and talking and talking about him endlessly.
Now that he’ll have a concert here on July, I wouldn’t of course pass up the chance to see him again.
And so I bought a VIP aisle ticket!! 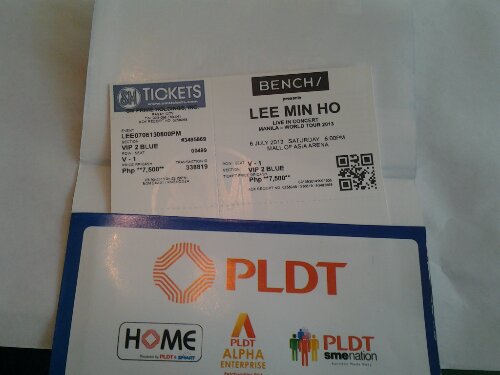 
Yes, I did save up for it.
I hope that he’ll be able to spot me and that I’ll have the chance to get close to him or even hug him!
It feel like I love like him more and more each day. ♡

Just yesterday, I posted about Lee Min Ho going back to Manila for his album tour concert.

And today, unsurprisingly, I am posting about him again!

His album is entitled “My Everything”.

And he really is… my everything.

Okay enough of that.

It is confirmed by everyone including Manila Concert Scene and Wilbros Live, the event organizer, that he will be coming back to Manila for his one night only concert.

When he first came here because of Bench/, it was held at Smart Araneta Coliseum. (Blogged about it before here)

This time, it will at the MOA Arena!

Lucky me because it is closer to my house which means I have one less reason for me not to make it.

Not that I will not make it if it is farther.

I will do everything I can to attend!

All I have to do as of now is to save up for the concert tickets.

I actually have no idea yet as how much it will cost but I’d really be glad if I’ll be able to afford the VVIP tickets and meet & greet passes if possible (if ever there is)!

I am very much ecstatic and all my sleepiness has gone in an instant!

A shout-out to the event organizers:

If you need an additional blogger for Lee Min Ho’s press-con or anything related to him, feel free to contact me and I will do it without hesitation! Feel free to do so okay? Thank you!!

And that is what you call a shameless shout-out.